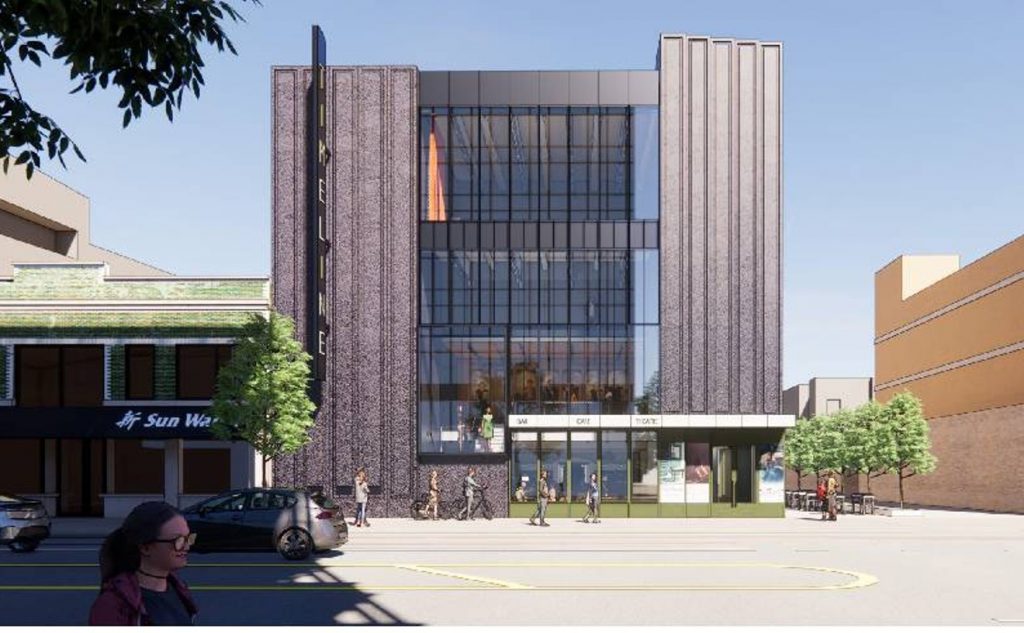 TimeLine Theatre’s mission is to present “stories inspired by history that connect with today’s social and political issues.” For most of their 24-year history, they’ve produced at the Wellington Avenue United Church of Christ’s upstairs Baird Hall in East Lakeview, using the narrow lobby space as best they could for their signature displays of photos, documents, and, well, timelines further exploring the worlds of the plays they produced.

Their dive into history onstage has included an acclaimed 2013 revival of Lorraine Hansberry’s A Raisin in the Sun, directed by Ron OJ Parson; the 2003 world premiere of Kate Fodor‘s Hannah and Martin (about the complicated relationship between philosophers Martin Heidegger and Hannah Arendt); and (appropriately), the Chicago premiere of Alan Bennett‘s The History Boys in 2009.

Now they’re ready to move to the next phase of their own history with a leap to a space designed just for them.

Back in 2018, TimeLine, headed by artistic director PJ Powers since 2002, purchased a warehouse building at 5033–5035 North Broadway in Uptown and embarked on the design and fundraising process to convert it into a flex-use 250-seat theater with enhanced lobby space. (HGA is the architectural firm behind the plans.)

Then the COVID-19 shutdown hit. Like a lot of people, I worried that midsize theaters with ambitious growth plans like TimeLine (the new space’s estimated price tag is $35 million) would be among the hardest hit. They seemed to be in the not-so-sweet spot of having fixed costs, but not the kinds of deep pockets and endowments that theaters like the Goodman and Steppenwolf (which will open its own fancy new building in February) have.

I should have talked to TimeLine’s managing director, Elizabeth K. Auman, sooner to alleviate my fears.

Auman, who is transitioning out of her role as managing director in order to take a more hands-on approach to the new venue renovations (the company hopes to open the Uptown space in 2024), isn’t new to this rodeo. Before joining TimeLine in 2007, she was the general manager at Victory Gardens and was a key force in their 2006 move up Lincoln Avenue, from their longtime home in what is now the Greenhouse to the renovated Biograph.

COVID or no COVID, Auman notes, “The fundraising for these kinds of projects, for performing arts projects, regardless of the size of the organization, is difficult. It’s not any more or less difficult for TimeLine than it is Chicago Shakes or Steppenwolf. The scales are different.” She adds, “We never got to a point during the pandemic where we thought this wasn’t gonna happen. We very quickly knew this was not going to happen on the timeline that we had in February of last year. Because we had a lot of things to focus on. The first couple of months when everything was shut down, it was focusing on how we survive. One of the positives of not producing is that it really gave us time to focus on design work.”

Unlike Steppenwolf, which put up an entire digital season in lieu of live performances, TimeLine didn’t create a lot of virtual content over the past year and a half. They did make available for limited runs ticketed streaming recordings of James Ijames‘s Kill Move Paradise, which was running at the time of the March 2020 shutdown, and of their 2013 Broadway Playhouse remount of To Master the Art, William Brown and Doug Frew‘s play about Julia and Paul Child, which premiered with TimeLine in 2010.

“We wanted to make sure that we just weren’t doing things because they were expected, and we really wanted to focus on the new home and figuring out what TimeLine looks like once we reopened,” says Auman. “We had a one-year COVID strategic plan that we were trying to work through. It had many ambitious things, not all of which we have accomplished yet, but we really wanted to focus on that and focus on the building and understanding that we also wanted to take care of the staff and the company and not ask them to do things that they weren’t excited about.”

What Auman and Powers hope to see with the new building is an enhanced experience for audiences and artists. Auman notes, “We did a couple major design flips sort of during the last year and a half, and one was adding a community education and engagement room, and the other was really sort of greatly expanding some of the backstage production areas.” The latter will particularly give more breathing room to the costume department, notes Auman.

The company’s Living History education program, which works with Chicago Public School students on creative exercises related to the themes and subject matter of their shows, will have space in the building as well. “We’ve worked with CPS students to really engage them in a conversation about how they may use the building, how they see themselves in the building,” Auman says, while emphasizing that they will continue to run TimeLine South, a youth training ensemble on the south side.

Exhibit galleries off the lobby will offer immersive and interactive displays related to the shows. There will also be a café and bar, and a glass facade on the street, which Auman hopes will invite more potential patrons to step inside and discover TimeLine.

While Auman is steering the new building to completion, the company will be hiring a new managing director to work alongside Powers. Auman won’t be on the search committee for her replacement, though she says with a laugh, “I would imagine I will be asked questions.”

After taking on two major theater renovations in less than two decades, Auman’s advice to other companies who might be thinking about moving to bigger digs is both optimistic and pragmatic.

“It’s not right for every organization and that’s OK. It should not be the goal of every theater to have their own space. I think it really has to be driven by how you’re executing your mission and how you want to use the space. Chicago is fortunate to have a lot of rental spaces. I am among the people who would say we need more.”

She adds, “And once you do a project like this, the expectation of your audience changes, your employees and the artists coming into the building have a different expectation, and you have to be able to clearly articulate what this building means and how it is serving the neighborhood, how it’s serving Chicago, and the artists that we want to engage with.”

Whether another company will take over TimeLine’s old space in Baird Hall remains to be seen.  v