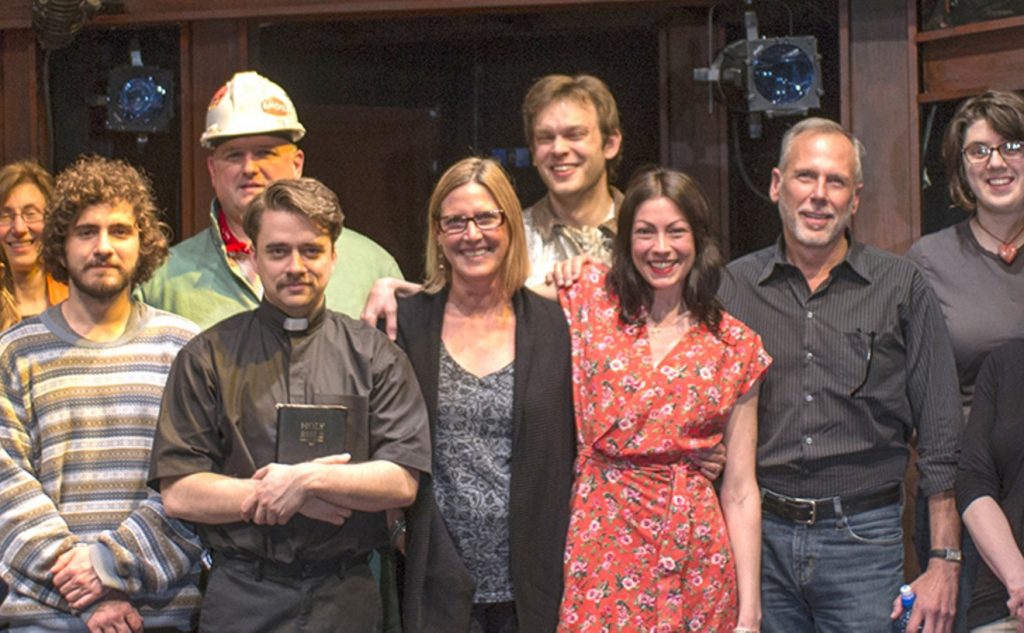 Editor’s Note: Sally Nemeth, an early force in the growth of Chicago as a city that nurtures new plays, died on July 30 at age 62 in Los Angeles after a long illness. Though she had moved away from Chicago in 1995, her influence continues to be felt by those who worked with Nemeth here in the 1980s and 90s. Douglas Post wrote this remembrance and history of Nemeth’s work and that of the peers whose careers grew up around her.

As memory serves, the invitation came in the form of a letter with a graphic of green balloons coming out of a green typewriter. Sally Nemeth was asking if I wanted to be a part of the Chicago New Plays Festival Company, a collective of local playwrights and directors dedicated to the development and production of new work for the stage. Formed in 1984 by Sally, Steve Scott, and Linda Walsh Jenkins, the group would meet every few weeks in a rehearsal room at Lifeline Theatre where we would read and discuss this work, and our initial membership would include writers Anne McGravie, Scott McPherson, Nicholas A. Patricca, Nancy Rawles, David Rush, Linda, and Sally, who would be our leader.

Have I mentioned that I accepted this offer with eagerness and enthusiasm? Well, I did, and was immediately glad I had done so. This was a lovely and smart group of people to spend time with and talk through the issues of writing for the American theater. And Sally was the perfect host. She was serious, but not too serious. She was flexible when she needed to be, but also had a clear idea of where she wanted us to go. And she was a terrific writer.

The following year, we were asked to be a part of the Organic Greenhouse Project, a developmental wing of the Organic Theater Company that was dedicated to nurturing new work and theater artists. Other organizations that were invited to be part of this venture included City Lit Theater Company, specializing in literary adaptations; Red Key Productions, an acting ensemble; The Design Unit, a local design resource group; The Directors Group, a collective of area directors; Fanfire Productions, a company centered on women’s issues; and MinaSama-No, an Asian American troupe.

None of us had a permanent home, or even a semipermanent home, and so we would make use of the multifaceted building on Clark Street as a foundation while receiving access to the Organic’s rehearsal and performance spaces, as well as sets, lights, sound, and costumes. This proposition came to us courtesy of Tom Riccio, who was the new artistic director at this institution, and Sally wisely accepted, though I’m sure she ran it by us for review.

I should mention that Sally and Steve Scott, who headed up The Directors Group, had formed an alliance and so we had a team of interpreters of our texts as we advanced our mutual artistic interests. This team included Sydney Daniels, Kyle Donnelly, Steven Ivich, Kate Loewald, Mary Ellen McGarry, and Susan Padveen. We would often draw on them for their insights and work together whenever we could.

Approaching December of that year, Ron Falzone, who headed up the Greenhouse Project, let us know that there was space available for a full production on their second stage if we had something that could be put up fast. The Organic Lab Theater had 65 seats, a tiny light booth, and an even tinier dressing room, and I had a musical adaptation of Kenneth Grahame’s The Wind in the Willows that I felt was ready to go. Sally told me we had $2,500 in the bank. That was it. If we lost this money, we were starting from scratch. Somehow I talked her into letting me mount my show as an offering for the holiday season. It was very well-received and we doubled our investment. Sally thought she was the smartest producer in town and, to my way of thinking, she was. Simultaneously, another musical version of Grahame’s story opened on Broadway. It cost exactly a hundred times as much as ours and lost everything. Our show ran for four weeks. Theirs lasted four days.

Sally would go on to produce three alternating evenings of our one-acts and playlets called The Summer Shorts Festival. On Tuesdays and Fridays, audiences could see Nick Patricca’s The Dream Machine and Hail Mary; and David’s “Life” is Only 7 Points. On Wednesday and Saturdays, they could take in Sally’s Celestial Mechanics, Visions of Grandeur, Word Games, and Holding the Bag; Nancy’s A Spot in the Shade; and Anne’s Oona and the Oyster Girl. And on Thursdays and Sundays, they could attend Scott’s Scraped and my triptych Belongings and Longings. It was the summer of 1986 and we got to collaborate with many of our pals who were a part of The Directors Group. That winter we coproduced a revival of The Wind in the Willows with Bailiwick Repertory. Sally made sure that we also participated in the Organic Greenhouse’s All-Chicago Play Project, a marathon reading series of 32 new works. She also introduced us to Dramatic Publishing Company, who promptly put three of our plays into print.

The next year, we expanded our ranks to include local scribes Robyn Dana Guest, Richard Strand, and Kathleen Thompson. For our second Summer Shorts Festival, we programed two evenings of plays and monologues that featured Sally’s Pagan Day and One Wolf; Nick’s Hail Mary II and Father; Kathleen’s Opalina and Kindness; and Robyn’s Readin’, ‘Ritin’ & ‘Rithmetic. Richard’s Can You Hear Me, Mr. Szczepanski? and David’s Times with Lorenzo were presented on alternate nights along with my farce Detective Sketches.

This was a remarkable outpouring of work from our collective and none of it could have happened without Sally’s fortitude and ingenuity. She kept us centered. And she kept us moving ahead. It is a rare thing to meet someone who is happy being a playwright among playwrights. Sally was one of those people.

Eventually she needed to step back from her responsibilities and so turned the reins over to Nick, which was a prudent choice. Chicago New Plays, as we were now called, would continue to coproduce full productions, partial productions, and readings with the Commons Theatre. We also took part in another marathon event when seven of our full-length plays received readings at The Open Eye New Stagings Lab in New York City. We continued to meet. We continued to talk about each other’s work. We stayed friends.

Scott would go on to write Marvin’s Room. Nick would write An Uncertain Hour. And Sally’s play Mill Fire would have its premiere at the Goodman Theatre, while Spinning into Blue would be produced at Victory Gardens Theater and Holy Days would open in London. She received grants from the National Endowment for the Arts and the New York Foundation for the Arts, as well as a new play commission from South Coast Repertory.

Eventually Sally moved to Los Angeles, where she started writing for television. Her work on the series Law & Order won awards from the American Bar Association and the National Council on Crime and Delinquency (now called Evident Change). In 2006, Knopf published her first novel, a work for young adults called The Heights, the Depths, and Everything in Between. And somehow she found time to teach and to remain an activist for her community.

I will always remember Sally as a vibrant, smart, full-hearted, and talented woman. I owe her a lot. She is a part of my personal history. And she is a part of the Chicago theater movement and what continues to make this city such a great place to be a playwright.  v

English electronic duo Paranoid London can only be described as the rock ’n’ roll specters of acid house. When they ...

Happy days are here again with these upcoming events and things to do in the week ahead! FRI 5/27 This ...

For many, mental health has only recently come into focus due to the COVID-19 pandemic. However, for those of us ...

Song and dance, but not enough story

Here’s the TL;DR version of what to expect from Ain’t Too Proud, the new jukebox musical about soul/blues/disco/rock hitmakers The ...

Horsegirl and the dream of a teen rock scene