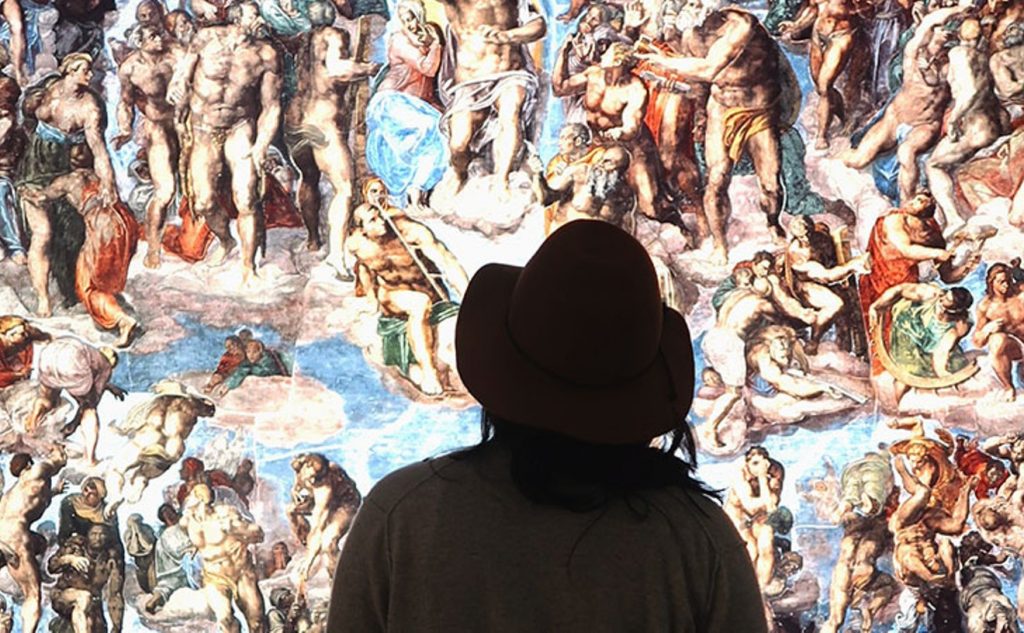 It had been almost exactly 30 years since I’d seen my favorite gorgon. I’d left him where he lived, on the wall of the Sistine Chapel, in the bottom half of Michelangelo’s The Last Judgment. His name is Charon, and he is charged with herding damned souls across the Styx—with a snarl that’s the stuff of nightmares. Charon, a monstrous embodiment of an Old Testament afterlife, has haunted me since I visited the Sistine Chapel in 1991.

I never imagined the Ferryman and I would next meet in the husk of an abandoned Sears deep in western suburbia. But there he (?), was, horrific as ever, part of an immersive exhibit that allows visitors to see both Michelangelo’s The Last Judgment and the magnificent frescoes of the Sistine Chapel ceiling, all from a vantage point that’s nearly impossible to achieve if you visit the art in their Vatican home.

At the Vatican, you have to elbow and push like a linebacker to get within eyeshot of Charon. In the old Sears, you can see him in all his otherworldly context. He’s one of some 400 characters in the massive painting; some being swept up into heaven and others cast down into Hell. All are depicted in SEE Global Entertainment’s pragmatically titled “Michelangelo’s Sistine Chapel,” an exhibit large enough to fill a big-box store.

Among abandoned mannequin plinths and forgotten dressing room mirrors, you’ll find The Last Judgment as well as frescoes from the chapel ceiling transformed into walls of tapestry-sized, high-resolution images. An audio guide provides insight and context to the art. A word about religion: far from pandering to his audience, Michelangelo embedded his paintings with the 16th-century version of Easter eggs. Portraits of those who antagonized him and those he loved can be spotted throughout his art. And while the frescoes show a cinematic visual depiction of various tales of the Old Testament, there are also the sibyls: images of the female divine, oracles from ancient Greece.

Viewers wandering the cavernous space will encounter a gallery of biblical terrors. (Judith beheading Holofernes is deeply satisfying and The Flood will give you nightmares, especially given recent events in Germany and China.) But there are wonders too: God literally shows His ass in The Creation of the Sun, Moon, and Plants and the Delphic Sibyl originates the art of the side-eye when her oracle reading is interrupted.

The touring installation (there are other iterations of the show currently on display in San Antonio, Charlottesville, and Charleston) is the brainchild of Martin Biallas, who had a less-than-optimal experience trying to see the Sistine Chapel.

“It was unpleasant,” he recalls. “Long lines. And once you’re finally in after a six-hour wait, you’re rushed through. You’re surrounded by 2,000 other people. There’s 50 guards looking at you like if you’re even thinking about taking a picture, they’re going to tackle you. And the view—it’s almost like looking at a stamp, you’re so far away.”

He continues, “I wanted to make it all more accessible. I wanted this to look like you were walking right under the ceiling.”

Spectacle has captivated Biallas since 1975, when he arrived in the United States from West Germany as a student, just in time for this country’s Bicentennial fever. “It was just everywhere, the red, white, and blue, everyone was celebrating,” he says of the year positively drenched in showily performative patriotism.

More than 40 years later, Biallas’s résumé is littered with outsized endeavors: He created “Star Trek—The Tour,” a 30th-anniversary international touring exhibition for Paramount; brought Egyptian sacred relics to the world via “Tutankhamun: His Tomb and His Treasures”; and created the “Titanic Official Movie Tour,” which opened at Wembley Stadium in 1999. He’s got designs on bringing a massive Banksy exhibit to life, and wants to “do something with American history,” eventually.

But back to (hello darkness) my old friend Charon. You can practically smell the sulfur as he raises his paddle to smash the skull of any lost soul who might try to escape. Michelangelo painted The Last Judgment between 1535 and 1541; the ceiling came much earlier, with the artist actually living in the scaffolding while he labored over it from 1508 to 1512.

“He was very secretive, kept things covered up,” Biallas says before telling an apocryphal story: “The Pope tried to get in to see it a few times, and Michelangelo would throw pieces of scaffolding at his head to make him leave.”

Visitors tend to initially gravitate toward the (arguably) most recognizable fresco, Biallas said.

“Of course the first thing people will try to spot is The Creation of Adam,” he says of the iconic image of a white-haired, buff, Old Testament God pointing toward Adam, their outstretched fingers sparking the creation of mankind.

“It’s a stunning, iconic image, but I was always more fascinated by The Last Judgment,” he continues. “It’s a perfect representation of our constant temptation, the battle between doing good and not. My dad was a Lutheran minister, so I learned a lot about the church and the bible growing up. But the painting was much more personal to me. I thought the message was timeless: so many things are not good for us or our world, yet we do them anyway,” he says.

“The Last Judgment is also the only place where Michelangelo put his self-portrait. He was like an early Hitchcock, giving himself this cameo.” (You can find the artist’s self-portrait in the flayed skin of St. Bartholomew.)

Among the ceiling frescoes, Biallas has his favorites.

“The image of God creating the sun and the planets. There’s one guy who is showing his rear end to everyone in that fresco and that’s God. Seriously. That’s a message,” he said.

Biallas is intent on figuring out a U.S. history installation, “. . . something that could take people from 1776 to today.” It’s a concept the Hannover native has been mulling since he experienced Bicentennial fever as an undergrad at the University of Michigan.

“When we were being raised (in Germany), we were raised without that kind of patriotism, because of Hitler and what he did in the name of nationalism. We couldn’t really be proud to be a German. So to me, it was fascinating how enthusiastic and devoted U.S. citizens were,” he says. “When I got my first car here, a Ford, I got a special Bicentennial license plate with it. It made me fall in love with this country.”

As for the gorgon, I pity him more than fear him. Of all the terrible jobs in the world, pushing people into a fiery pit has to be among the most terrible. I’ll have to come back in another 30 years to see if he has changed, again.  v